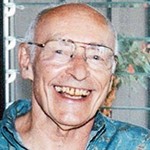 Fox, Alan J. "Jerry" Passed in his sleep on November 7, 2019. Born in Chicago on June 20, 1929, Jerry moved to Lotus Lake and became a native Minneso tan in December, 1945. A 1956 graduate of the University of Minnesota, Jerry married Ann, the love of his life, on August 12, 1956, and graduated with his MSEE from Northwestern University in 1958. Jerry spent his career in the defense systems industry, with stints in Santa Monica, Boston and Washington DC before returning to Carver County and Lotus Lake to stay in 1969. His family and friends knew, and will always remember, Jerry as a kind, giving, gentle man who was meticulous in all that he did, whether it was in his engineering career, maintaining his immaculate lakefront yard, or mixing the perfect gin and tonic, and as a true Minnesotan who refused to let someone else shovel his driveway until he was well into his 80 s. Jerry is survived by his beloved wife Ann, children Alan and Chris (husband Larry), and grandchildren Eric, Sean and Colleen. In lieu of flowers the family requests donations to the Minnesota Landscape Arboretum. Huber Funeral & Cremation Services Excelsior Chapel 952-474-9595